Unnao famed for its tanneries and cuisines, is parallelogram shaped and positioned within latitudes 26o 8’ North and 27o 2’ North, while its longitudinal co-ordinates extend between 80o3’ East and 81o3’ East. It is bordered on North, East and South by the districts of Hardoi, Lucknow and Raebareli respectively while the river Ganga to the west separates Unnao from Kanpur and Fatehpur. This district in Uttar Pradesh extends over an area of roughly 4589 square km. 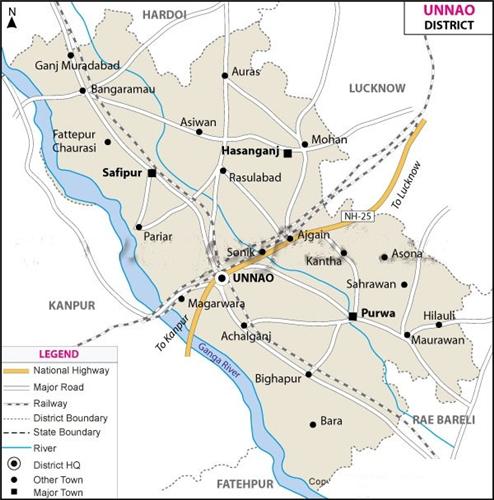 The two major rivers of Unnao, namely Ganga and Sai are primarily responsible for building up the district’s topology which includes the lowland and upland:

These tracts cover almost 23.7% of Unnao’s total area and spreads along Ganga to the west, while the Sai runs along its northern & eastern limits. The Ganges lowland also called tarai and khaddar stretches between the river’s main channel and its ancient high bank. Its width varies between one to nearly ten kilometers which broadens at the confluence of the Ganga with its tributaries, such as towards north-west & Pariyar Pargana. Lowland is frequently visited by floods and has a small population. There is rampant growth of grass plus babul trees over extensive regions within the tract. Stiff clay constitutes the typical soil other than areas where fluvial action has caused deposition of sand.

The lowlands generally yields an erratic kharif harvest along with excellent rabi crops over a series of arid years, which is however inadequate during a wet period. The lowlands of Ganga span 19% of Unnao’s whole area. The Sai lowland, although akin to that of Ganga is much smaller. Its soil is primarily hard and moist which is prone to water logging during wet years and the resulting reh considerable diminishes its fertility. 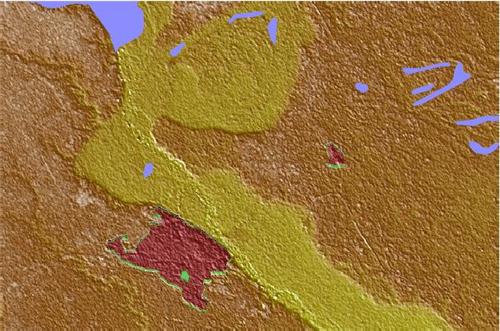 The uplands account for nearly 76% of Unnao’s area spreading from the primitive high embankment of Ganga till the Sai plains. The raised bank’s track, though uneven is well marked. The upland has gently rolling surface, shallow water table and poor irrigation facilities. Another layer of identical light soil occurs along the shores of Sai. The soil sometimes elevates to bhur with extensive sandy bluffs jutting to the Tarai in the parganas of Sikandarpur and Fatehpur Chaurasi. Further interior, the area is primarily comprised of arable stiff loam fragmented by big usar wastes plus flat rice depressions.

Sandy soil crests create extensive depressions at certain places where clay predominates. The more yawning depressions give rise to lasting lakes and tanks whose extent and size grow on going from north towards south. The significant streams flowing across the track include the Basha & Loni. The area on both sides of the Basha is marked by frequent outgrowths of bhur. It offers an inexpensive and simple means of watering resulting in rich rice crops being reared on its bed at various places. The Loni, although is hollow at its origin, however, flows within a broad bed at the onset of rains when lush transplanted paddy crops can be harvested.

Sharda Canal and Irrigation in Unnao

Irrigation in Unnao is accomplished by the network system of Sharda Canal plus tubewells. Approximately 92 percent of Unnao’s area undergoes cultivation. Roughly 87 percent of the area cultivated once annually comprising 3 lakh hectares is watered with surface water of Sharda Canal grid plus ground water of flat and fairly deep tubewells. The proportion of irrigation by surface water approximates 48 percent while that by ground water constituting the remaining 52%. The district’s economy is primarily based on agriculture.

As Unnao is situated within Gangetic plain, the type of forest prevalent is tropical evergreen. The important trees in the district are Neem, Mango and Mahua, apart from Saal, Sagaun plus Bamboo.

The prominent lakes in the district are Kundra Samundar and Mawai Bhari besides Kursat and Harial Tal.

The climate of Unnao is subtropical. The summer temperatures range from 35 to 48 degrees Celsius while in winter it is between 100C and 150C. If you want to visit Unnao the finest time is during February & October months.

The major rivers draining the district include Ganges with its tributaries like Kalyani, Khar and Loni plus Marahi on its west while the Sai river flows in the district’s eastern portions which are all perennial.