Business and Economy of Unnao

Unnao ranks among the leading industrial towns with majority of leather, abattoir, textile and steel, besides various industries. The industrial region of Unnao is located adjacent to Kanpur on the northern flanks of the Ganges with over fifty industrial units, primarily comprising tannery. The efflux of the industries passes across a Common Outflow Treatment Plant, before being drained into the Ganges. The surface water quality of the industrial region is always prone to contamination and considerably high presence of chromium within ground water in some portions of Unnao plus Kanpur districts form a typical feature of the area.

Topographical condition of the city’s industrial area has prime importance, which promotes industrial needs being away from residential area and within close proximity to roadways, railways plus airport. Banks also exist nearby with financial institutions such as IDBI and PICUP lying within 40 to 60 kilometers of Kanpur and Lucknow. The RBI present at Kanpur is just 30 kilometers away.

Most of the industries in Unnao industrial region are EOUs and various developments have occurred by the endeavor of District Administration and Udyog Bandhu. IIA is also engaged in a dynamic manner to solve the delicate issues encountered by industries during their daily working in association with government departments plus local administration. Concerted efforts are being made by district administration to develop infrastructure facilities for the industrial region on urgent basis. 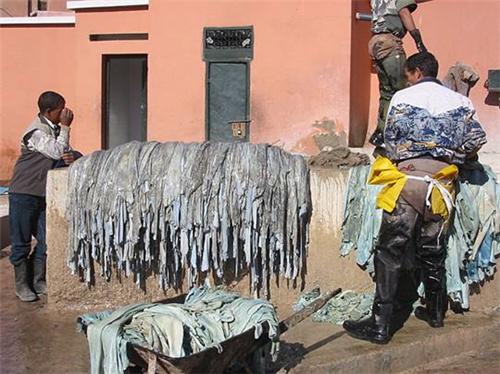 Tanning constitutes the largest industry with Unnao acquiring its special niche in leather industry plus leather products. The town has big factories of Superhouse Group and Rahman Exports, Zamzam Tanners and Mahavir Spinfab, apart from the private limited garments firm Parash Nathtech. Sadar Bazar, which constitutes the primary local market, has a large number of electronic shops such as Ashoo Electronics.

Apparel shops like Salma Fancy Store, saree shops like Roop Rattan and Parveen Saree plus Meena Saree hub, besides Hina Garments and Roop Fashion, feature among the renowned shops of the town.
Unnao is acclaimed for printing and dyeing of lihaf or rajai and mosquito net makers Subhan Bux, Usman Bux & Co and Aman Traders.

The chief exportable items comprise leather and leather goods, food and beverages along with textiles plus hosiery.

The firm Mirza Tanners initially began as a tannery manufacturing leather which has presently been transformed into a wholly unified manufacturing company churning out 5000 pairs of finished shoes daily.

It includes the following units:

Mirza Tanners ranks among the leading shoe supplier to famous concerns in Europe such as Bata-Italy and France, Deichmann, Germany and Florsheim Australia along with Olovers, Barrats Shoefayre plus Streads and Simpson in United Kingdom and holds joint venture firm in Britain as well as South Africa. The shoe brands Red Tape and Oakridge are being sold by the company.

Superhouse group was started nearly four decades ago, which at present is a prominent conglomerate including 3 tanneries, 8 production units dealing in leather goods and accessories such as gents shoes, apparel and safety boots. Possessing an annual output of nearly 30 million US dollars per year, Superhouse is globally acknowledged across 35 countries like Europe, America plus Middle East.

This company is currently engaged in selling of large amounts of equestrian products, casual belts & pet accessories developed out of Indian buffalo hide catering to the modestly priced market sector and lesser quantities of foreign English leather for meeting the needs of the top tier of the mart.

Kings International has freshly launched a significant backward integration scheme for producing high grade plant extract tanned equestrian plus sole leather by employing Indian buffalo and hides from Europe and South America, with application of imported plant tanning extracts. The project with a capacity of 200 hides daily is technically assisted by CLRI and BLC.

The annual rate of growth of industries in Unnao district for micro & small scale segment is 9.8 percent, while for medium and big scale sector the figure is 4.8%.